Carl and John Bronner – Old Kilgobbin Farm
Opened the backdoor one morning to find two Staffies sitting eyeing out a porcupine.  After eating John’s birdseed, it must have fallen into the courtyard and I suppose as it got lighter he decided the nook at the back door was the darkest, safest place, even though it had 2 staffs sleeping there. When we opened the gate it tore across the arena to the forest and I doubt it will ever come back again. Needless to say, Mofokeng was utterly dissappointed that he didn’t have nyama! 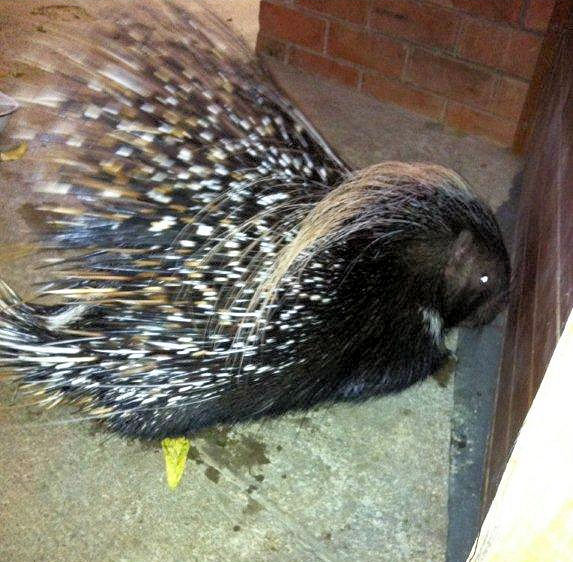 Jeth saw what he thought was a lynx in our driveway late on Friday night.  There was a snake – about a metre, on my front veranda. Never seen one like this before – very light brown with shapes on it, not diamonds, more the patches on a giraffe, with yellowy edge and dark brown inside.  I was hanging onto the dogs and stomped my foot to get it to move faster and it turned and did hectic long hissing at me!  Anyone know what it was?  About 3 cm fat with small head.
Loads of jackal droppings right by the staff houses this week, 2 duikers every single evening in my hay field.
Colleen and Willem Van Heerden – Khululeka
2 Peregrine falcons hunting
Antelope (buck)
Hooting of owls (hearing only)
Saw a blue mole snake
Locust huge one’s in the garden
Heard jackals calling
Sharon and Robin Barnesly – Sanctuary
The rainfall is 24mm which is low but traditionally, April rainfall is erratic. Ranging from 90mm up to 200mm but some years they have been in the 30’s, 20’s and as low as 12,5mm in 1999. Last year April’s rainfall was 169.5. We had the first light frost around the 19 April.
The crowned cranes are still around, huge porcupines and some hares and duiker, plenty of geese (Egyptian). Tragically, one of the biggest porcupine I have ever seen was killed by a car (not ours!!) 10 days ago one evening. Although it is clear that we seem not to be short of them as I have seen evidence of their digging all over Sanctuary. Not that we saw them here, but we did have a wonderful two days in Wakkerstroom and saw most of what we should have up there including Southern Bald Ibis, Botha’s Lark, Rudds Lark and Blue Korhaan. Unfortunately could not find any Ground Woodpecker – it is a good little town to visit.

Kate and Gary Kelly – Beverly Country Cottages
We have a pair of resident African Wood Hoopoes in our garden, which we see from time time. I saw them last week.
A Crested Eagle was perched in one of the dead gum trees at the bottom of our property. I am sure I saw a pair of Crowned Eagles circling over head but cannot confirm this.
We found some pretty big serval droppings. Other than that, plenty of doves, crows, starlings, little sun birds. Will have to look them up! The cat or dog caught a golden mole!
Rose and Barry Downard – Oak Tree Cottage
Midlands Dwarf Chameleon, tiny tree frogs, large Palystes spiders, butterflies, long hairy caterpillars, lots of skinks.
Birds: Hoopoes, Weavers, Doves, Bulbuls, Southern Boubou, Fiscal Shrike, Olive Thrush, Cape Robin, Cape White-eyes, Sparrows, Drongos, Hadedahs, Crows, Mousebirds etc.
Snakes: Red-lipped Herald.
Heard – Spotted Eagle Owl, Cape Parrots, howling Jackals.
Bernard and Ros Janisch – Misty Meadows
The Cape Parrots were here last week.  We have also been watching the long-crested eagles encouraging their young one to fly – wonderful!
Malvina and Evert van Bremem – Old Furth
Heard: Fish Eagles and tree dassies and lots of jackal and baboon and owls
Seen: red-throated wryneck, olive woodpecker, giant kingfisher, pied kingfisher, yellowbilled ducks, loads of our resident sunbirds (black, even a malachite? and also gurney’s sugarbirds), southern bou bou, blackheaded orioles, delighted to see our resident wagtails are increasing in numbers, the secretary bird baby has left the nest and we are seeing lots of social activity from the egyptian geese now that the babies are having friends over to ‘visit’. Finding lots of chameleons and seeing quite a few ‘karkloof blue’ butterflies – I wonder if they are karkloof ones or a subspecies found in Dargle? Found a marvellous slug – huge –  and if I have identified it correctly, it is the one which eats snails – yay! The snails are fat and healthy and fed to ducks and chickens whenever they are discovered as they have eaten all attempts at flower gardening, except for antirrhinums and foxgloves and aquiligeas.
The forest buzzards and kites and gymnogenes have all been moving their offspring out of their territories. The francolins are raising babies and so are the guineafowl we so seldom see.
Serval eating gyppo youngsters, and other wild waterfowl and francolins etc. Not our muscovy ducks, thank goodness!
Little brown mouse with very long tail hoping like a kangaroo. Anyone know what it is?
Eidin Griffin and Malcolm Draper – Wits End
As we were riding the other day, a family of reedbuck lept out of the long grass. There was a covey of francolins busy in the garden. Very vocal crows are int he yard every morning. We saw a pair of crowned cranes and some spurwing gees at the dama at Corrie Lynn.
Nikki Brighton
I saw three little brown mice in the grassland, I think I may have disturbed their nest while walking. Reedbuck, bushbuck, samango monkeys, hares.
Plants:  Plectranthus elegantulus, Pavonia columella, Plectranthus laxiflorus, Senecio tamoides, Phymaspermum acerosum, Leonotis, Rabdiosella calycina. In seed –  Dombeya tiliacea, Trimeria, Kiggelaria, Rhus, Maytenus mossambicensis, Canthium mundianum, Carissa bispinosa
Birds:  pair of white faced ducks, Francolins, Pied Crows, Stone Chats, Jackal Buzzards, White eyes, Southern Boubous, Cape Robins, Thrushes, Rock Pigeons, Grey headed Sparrows, Bulbuls, black Sunbird, Fork-tailed Drongo, Golden Oriel, Hadedas, Swallows. Heard Fish Eagle, Crowned Eagles, Wood Owls.
Jackals calling and tree dassies too. Lucky me. 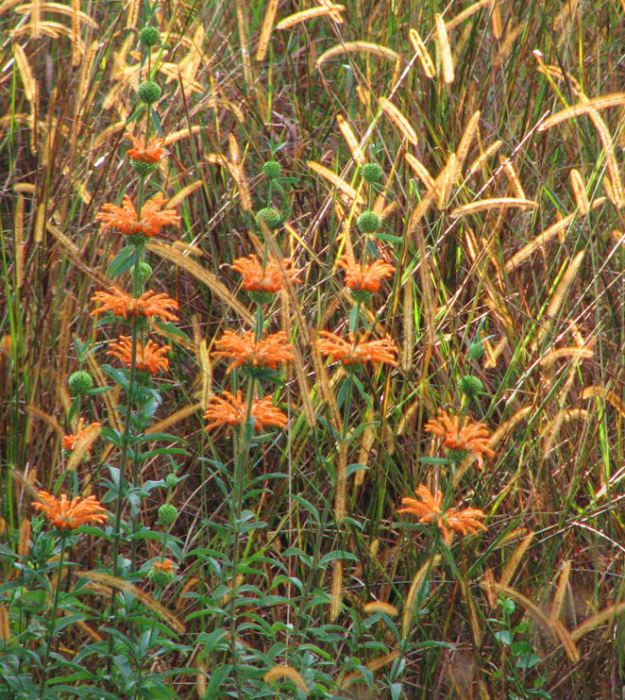 Barend and Helen Booysen – Kilgobbin Cottage
Guests in our cottage spotted a Blue Duiker while walking in the forest.  This is very exciting. last year I saw a pregnant female in the same area.
Hunting Dogs
Ian Little, Threatened Grassland Species Programme Manager for EWT, sent this message: Please advertise that should this be seen again (anywhere) it should be reported immediately to:
Riaan van Rooyen (SAPS) – 0823762499  or
Kim Gillings (EKZNW)          – 0845777066 or
Samson Phakathi (EWT)    – 0828054806
This is very important if we are to have any chance of fighting this illegal activity.
uMngeni River Walk
The river walk team set out from Mngeni Vlei on 1 May. The first couple of days were absolutely glorious, but then they started to come across invasive infestations, degraded river banks and litter in the water.  They are having the most marvellous adventure – do follow their journey on www.umngeniriverwalk.com.  They are exceptionally grateful to all the Dargle folk who have been so generous.  Margie Pretorius, Kate and Gary Kelly, Merrill King, Yvonne Munk, Colleen van Heerden, Nikki Brighton, Eidin Griffin and Malcolm Draper, Dean and Serene de Chazal, Kathryn Coulson, Vicky and Craig Alison, Nicky Mann, Peni and Rob Hanbury, Wilma and Greg Martindale and Dargle Conservancy. At a function at Tanglewood Coutry House, each team member was presented with a Dargle Dassie Certificate in recognition of their contribution to conservation in the Dargle and beyond.

Wildflower of the Month
Coccinea palmata
Common name: Wild cucumber, Afrikaans name: Bospampoentjie, Zulu names: uthangazane omncane, uthangazane lwehlathi.
This creeper, found in midlands forests, is fruiting at the moment. The cucumber-like fruit is an attractive bright orange-red fading to green at the stem end. It has creamy yellow flowers in summer – the male flower is borne on a long stem, while the female has a short stem.  The climbing stems are corky.  The soft leaves are slightly hairy, deeply lobed and can be cooked and eaten as spinach. In Malawi during times of famine, the potato-like bulb is also eaten. Dried fruit infusions are used in traditional medicine as purgatives. About 30 species occur in Africa with seven found in South Africa. They are part of the cucumber family.
Creepers add a new dimension to your wildlife garden, providing habitats and food for birds and insects.