Yesterday, just as the tiny green leaves on the Celtis africana trees are beginning to emerge, 18 children from Corrie Lynn School in Dargle headed into the forest at Kilgobbin Cottage.  The Zulu name for Celtis is uMvumvu which describes the sound the bare branches make rubbing together in the wind, during winter.  The common name, White Stinkwood, describes the unpleasant smell of the wood when freshly cut. 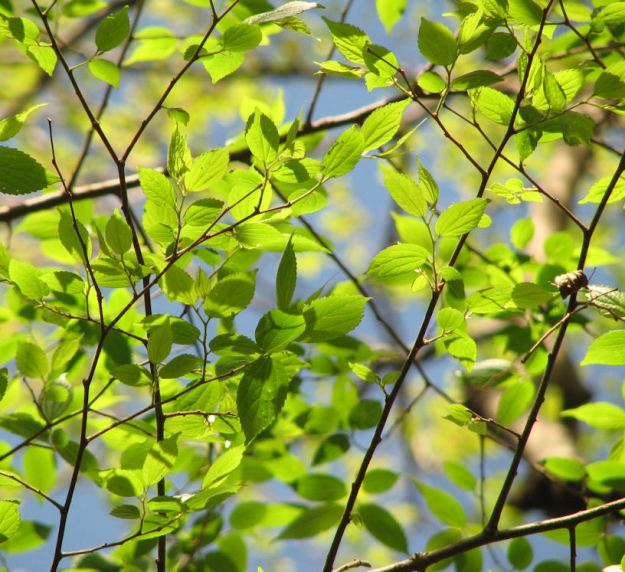 “What else do you know about the forest?” asked facilitator, Penz Malinga.  Answers included the facts that is has a canopy of tall trees, is usually moist and shady, many birds live in forests and there are lots of creepers and different layers of plants.

After an explanation of the functions of leaves and the different types, each participant recieved a card with a sticky band on which to stick as many different leaf shapes as they could find. There were ferns, quilted Lemonwood leaves, small smooth Carissa bispinosa, asparagus fronds, tiny Pepperonia, sticky grass, heart shaped Plectranthus and star like Senecio.

Along the path there were signs of animal activity – bush pigs and duiker too.  On a couple of trees the lower bark was rubbed smooth, obviously by animals using the tree as a scratching post. This provided an opportunity for everyone to do some bark rubbings.  Some tree stems were very rough while others were quite smooth.

A Knysna loerie (igwalagwala) calling stopped everyone in their tracks as they peered to see it perched on the branch of a tall Cape Chestnut. The forest floor, covered in leaf litter, was full of interest too.

On the side of the path, we came across an old saw pit – from the days when the Yellowwoods were felled for timber. Sindi Zondi climbed in to show how deep it was. 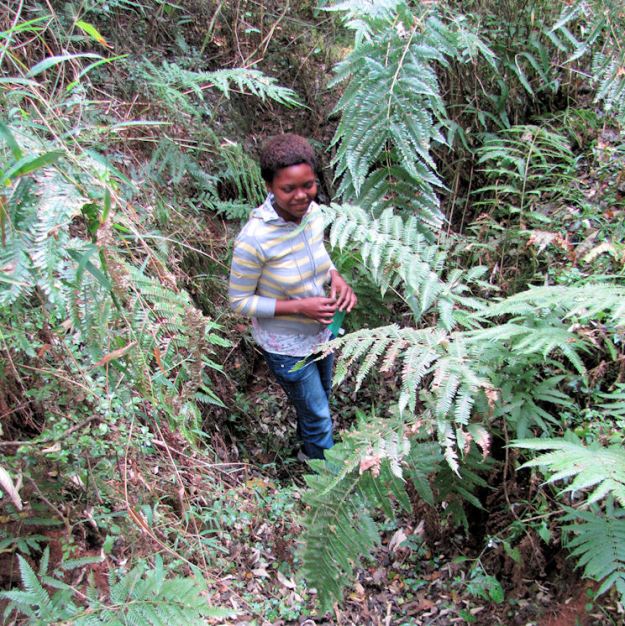 Here we discussed the National Tree of South Africa – Podocarpus latifolius.  The first guess at the name of our national tree was Wattle! The yellowwood family is ancient, having grown in this part of Africa for over 100-million years. The real yellowwood is found from Table Mountain, along the southern and eastern Cape coast, in the ravines of the Drakensberg up to the Soutpansberg and the Blouberg in Limpopo. In forests, the trees can grow up to 40m in height with the base of the trunk sometimes up to 3m in diameter. The bark of the real yellowwood is khaki-coloured to grey when it is old, deeply split and peels off in strips. The crown is relatively small in relation to its height and is often covered with grey lichen.

A small forest stream, was a welcome stop as everyone quenched their thirst in the sweet, cold water. Sitting on fallen logs provided an opportunity to discuss decomposition – the work that fungi, bacteria, worms and insects do to break down the dead trees.

After a picnic lunch, it was time for a little ‘solitaire’. Sitting quietly on their own in the forest allowed everyone to really listen to the sounds around them. They heard Samango monkeys, birds, rustling leaves, and described the sounds like shwee shweee  and kroo kroo kroo. 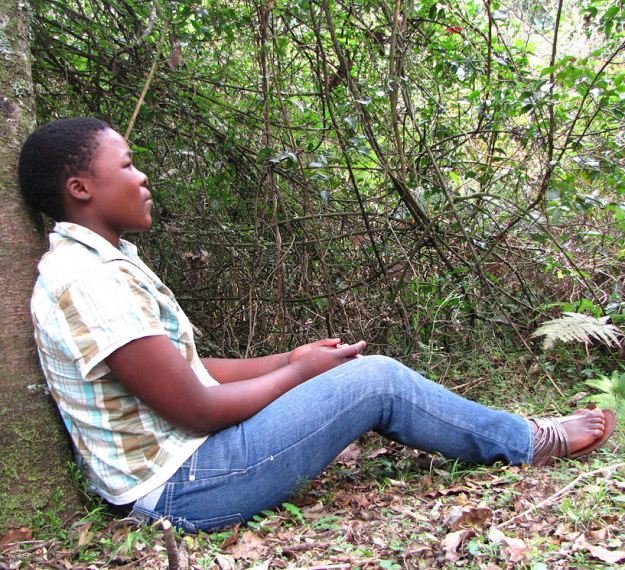 Being alone was a bit frightening at first, but after a few minutes they settled down, got comfortable and felt peaceful and happy. A bush buck was spotted in the undergrowth.

Too soon, the African Insight bus arrived to take everyone back to school. It was a thoroughly enjoyable and interesting morning.  The Dargle Conservancy, who arranged the fieldtrip, believes that visits to the forest which support curriculum learning, help to inspire the children to value our special biodiversity. 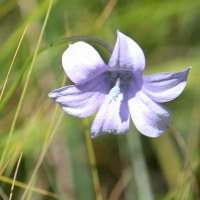