Despite the cold, wet forecast for our wilderness weekend at Cobham, spirits were high as we trundled through the Midlands, crossing swollen rivers and passing small towns.  Lungisani commented: “I enjoyed the journey passing new features like rivers and dams and learning their special names.”

After claiming our beds in Pholela Hut at Cobham Nature Reserve, we headed down to the Pholela River in the mizzle. Rocks glistened blue-grey beneath the clouds.

Before we had even crossed the suspension bridge there were cries of “Can we swim?” and six teenagers stripped and jumped right in! 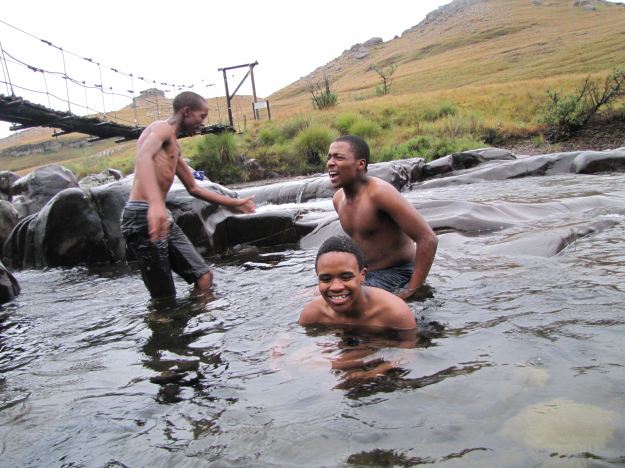 It was absolutely freezing, but sliding down the rocks, wallowing in the ‘jacuzzi’ and splashing in the pools proved to be too much fun to resist! “Ey, the water was cold. It was hard to breathe and I felt I was not really alive!” laughed Sanele when he got out. 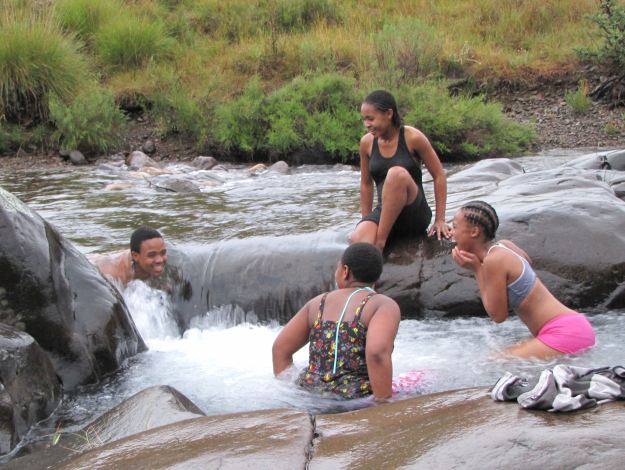 “I love the Pholela river with adorable rocks and clean fresh water.” said a grinning Nondumiso.  Christeen huddled under the bridge in her rain-suit keeping the towels dry for when the novelty wore off. It took a while.

Fortunately, hot showers awaited and after getting dry, we huddled around the fire, chatting about the uKahlamba World Heritage site, san rock art and life. 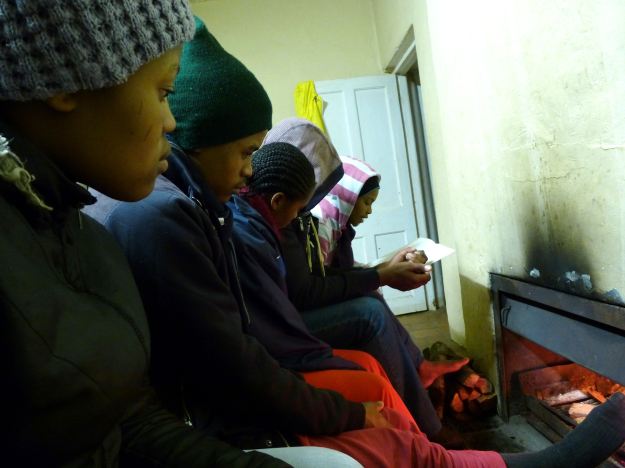 After supper, Nondumiso read us the enchanting San story “Wood Ash Stars” and we sang songs to keep us toasty.

The next morning dawned pretty gloomy too. The party sharing the hut decided to leave, but we stayed put, feasting on ‘happy eggs’ for breakfast donated by Highveld. 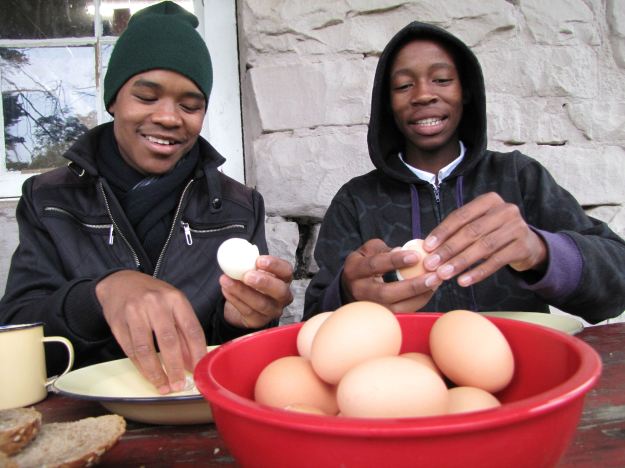 We found an interesting insect on a breakfast banana and after searching through the Insect Book identified it as a Stonefly. Stoneflies occur only in areas where there is no pollution so are indicators of a healthy environment. 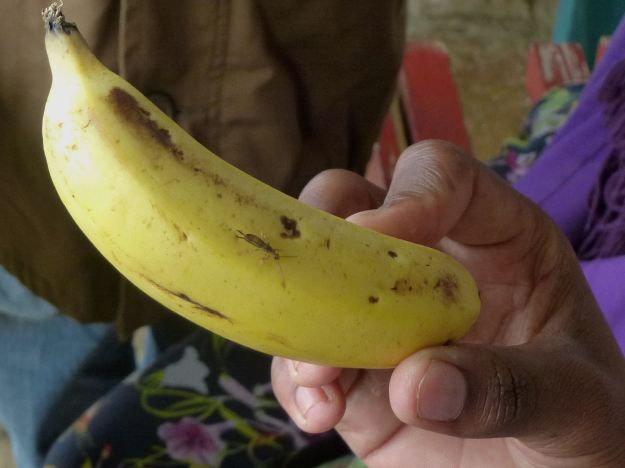 We poured over a map of Cobham, imagining where we might walk if the weather improved.  Christeen showed everyone how to use a compass and we discussed how the Drakensberg landscape was formed.  “I learnt a lot. In actual fact, it was the addition of lessons at school – applying skills to reality. We learnt how to use a map, making sure the map is facing North using a compass.  Wildlife, Geology, Ecology and Biodiversity studies took place this weekend.” Said Lungisani enthusiastically absorbing every scrap of information. 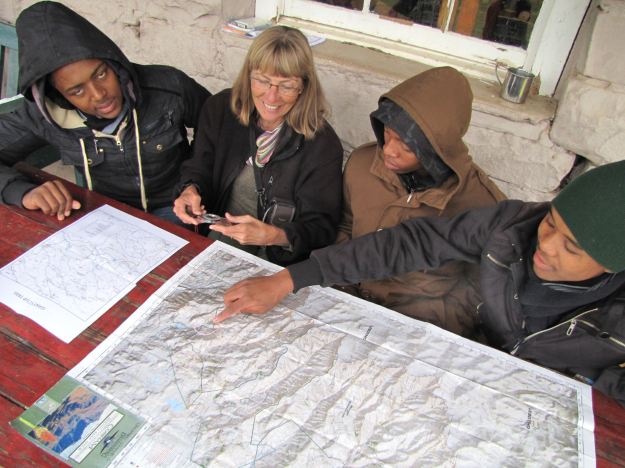 As soon as we spotted a break in the weather, we dressed up warmly and headed along the path beside the river.  Nondumiso commented (after observing the mix of nationalities in the party sharing the hut, no doubt) “It is important to take care of this beautiful environment because it attracts tourists.” 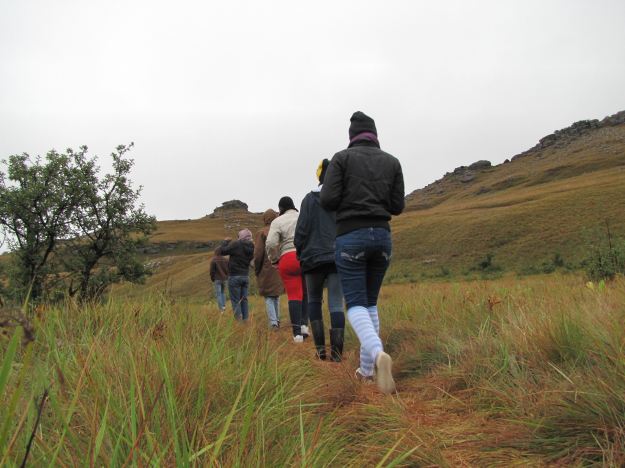 We splashed through so many puddles that by the time we reached the big pools in the river, we were drenched anyway. Swimming seemed like a sensible option.  With dry clothes safely stowed in a big orange plastic bag, everyone frolicked and froze.  The river was really high after all the rain.

Then it was a mad dash back to get warm over lunch around the bonfire in the boma.

Food was all local, mostly organic and meals provided plenty of opportunity to talk about food miles, healthy living and taste new things. The delicious ‘sausages’ donated by Fry’s vegetarian foods, had everyone fooled into thinking they were eating animals. “I learnt that I mustn’t always eat meat, I must also eat veggies a lot.”  said Thabo tucking in, hungrily. 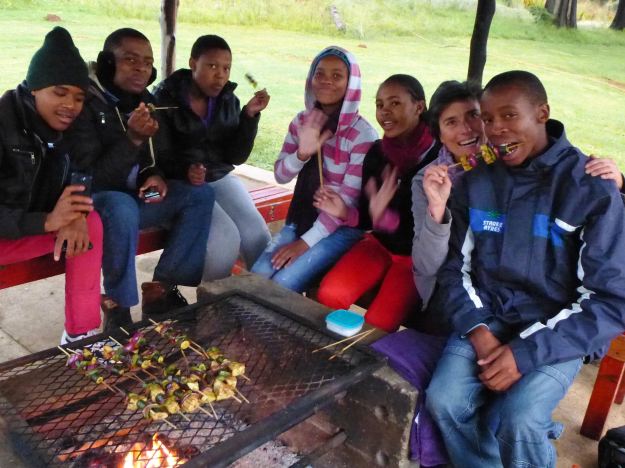 Despite getting to bed really, really late, when the sun rose on Sunday morning and lit up the snow-capped peaks we were all rearing to go.

Yay! We can see the mountains! Good morning Mr Sunshine!

We decided to hike along the second day of the famous Giant’s Cup Trail which we had seen on the map the day before. “I was a little scared to be in the wild, because I am not used to being alone in a place like that.” said Sanele, adding “I was so interested to learn why the Drakensberg is a World Heritage Site.”

It had stopped raining but was still pretty cool. Brisk walking kept us warm. 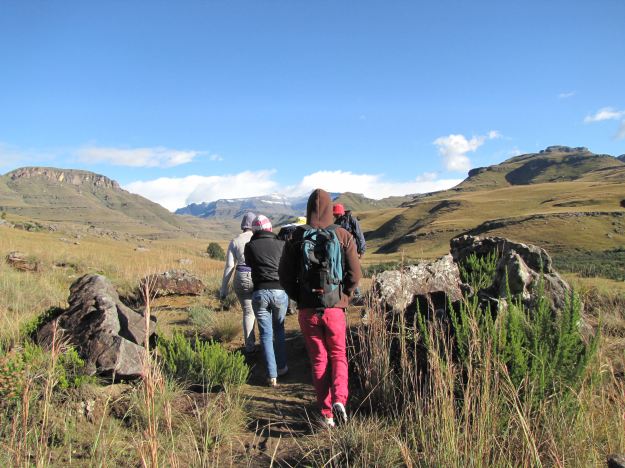 We added rocks to the cairn markers and admired the view down the valley.

There were not many flowers in the grassland, except the occasional Dicoma anomala (below)

We explored rock crevices and Lungisani was thrilled to find a Watsonia which he recognised from the SANBI CREW Bioblitz held last year in Nottingham Road. 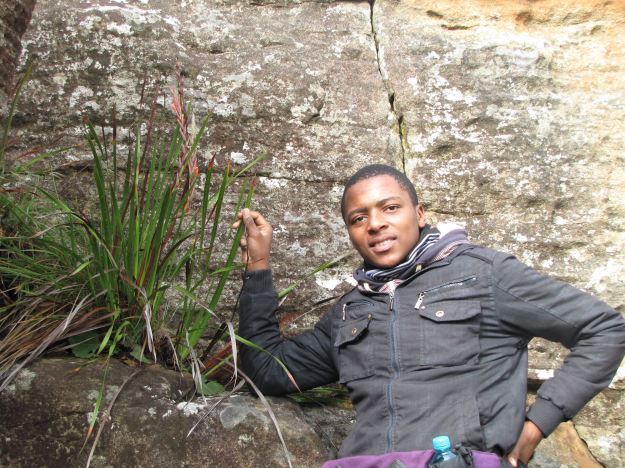 Naledi carefully noted everything she observed “The best things for me were seeing the animals tracks (jackal and water mongoose) baboons and indigenous plants like Leucosidea serica and protea.  I learnt a lot about nature.”

We saw eland and baboons across the river and then a troop of baboons on the rocks above us too.  “I enjoyed hiking because we saw animals and I love animals.” commented Thabo who was fortunate to take up the place of someone who fell ill at the last minute. “Thank you for letting me go with you guys even though I am new”  he said.

To make the most of the break in the weather, we settled down out of sight of one another for a period of quiet.  This was a highlight for all of us.

Naledi said “You know, a person needs some quiet time. It felt good listening to the sound of nature and the river flowing.  I observed that there were clouds covering the mountain and they were rising. Watching them rise was the best part.”

“During quiet time, I felt peace, love and the presence of the Nature. I just couldn’t resist it, the love of nature grew more inside me. Now I’m in love with Nature.” added Nondumiso 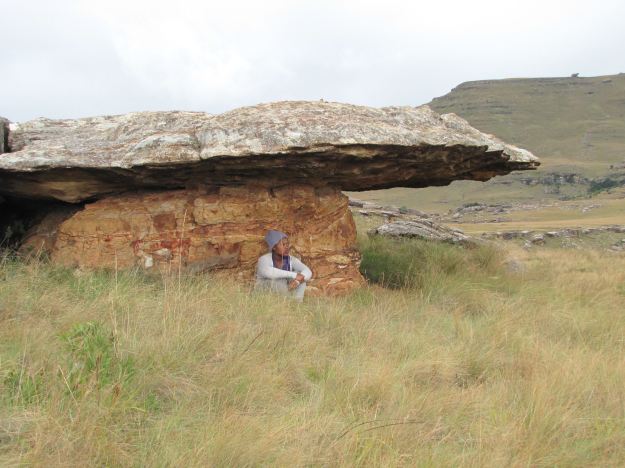 We decided to be quiet all the way home and savour the majesty of the mountains surrounding us. 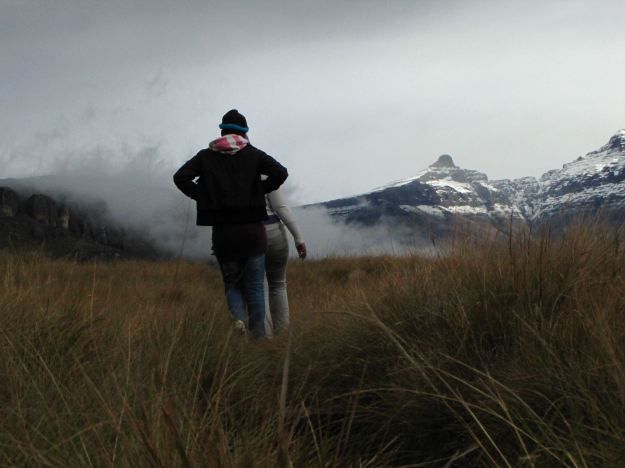 After a short detour to admire Merxmuellera, the beautiful tufted grass found along Drakensberg streams, and one last swim as the weather closed in,  we had to head home.

The road had been slippery on the way in and we were unsure how easy it would be to get back to Himeville.  We managed fine until the road was narrowed by a stuck milk truck and we slid into the slush.  Shoes off and out we got to push!

Later someone quipped “you know you are having an adventure when you wish you were home with a cup of tea!”

On the trip home, Nokukhanya summed up her experience: “I saw snow, mountains, rocks and rivers. I enjoyed eating vegetables, swimming and staying up late at night by the fire. Being with you is full of joy and we learnt a lot, not only about the environment but also how to treat others when working as a team.   I am speechless, I don’t know what to say or what to do to show you the way I feel about this trip. God bless you until a new generation comes and has your hands and love that you have given us.”

Even her mum, Bonisiwe Zondi, was excited saying afterwards “Nokukhanya has told me about each and every thing that happened at Cobham. She says she didn’t even miss me because she was having such a good time. She is trying to make us all live a sustainable life and I am so impressed.”

“I felt like I was in a new planet, not the ordinary one because of the beauty. I really loved that time and I wish I could be there for much of my existence – in a place where nature is the priority. It is the best , peaceful place.” concluded Lungisani.

Thank you N3TC for your continued contribution to enriching the lives of communities on the N3 Route. “They really help us a lot.” said one of the kids after recognising the N3TC logo on the latest edition of N3 Heroes. 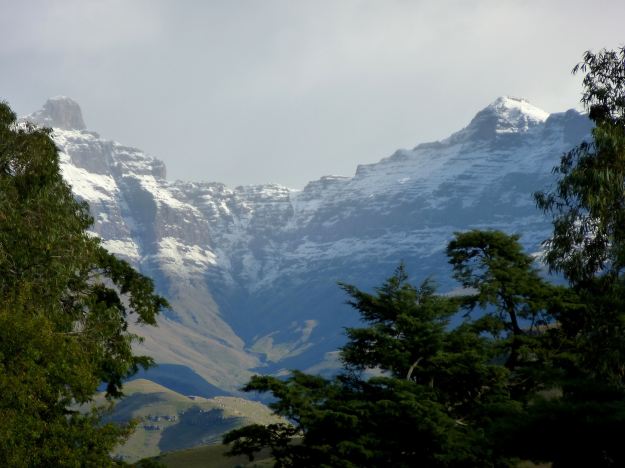 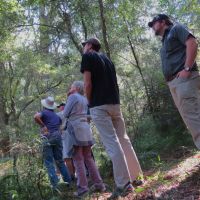