We were away for half of November but on our return we were thrilled to find we had had a lot of rain and our dam was full at last and everywhere so green. Quite a change from the Cape.

One morning to our astonishment, a young male reedbuck wandered through the garden quite happily. Thank goodness the dogs were elsewhere.

We have woken up for the past few weeks to Reedbuck eating the long grass in our garden. 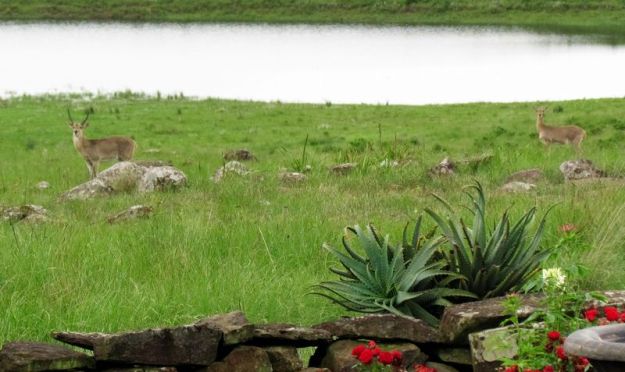 A porcupine got into the garden one night and dug up a heap of cannas – there was a fight with the dogs and as usual the dogs came off second best being stabbed with quills. 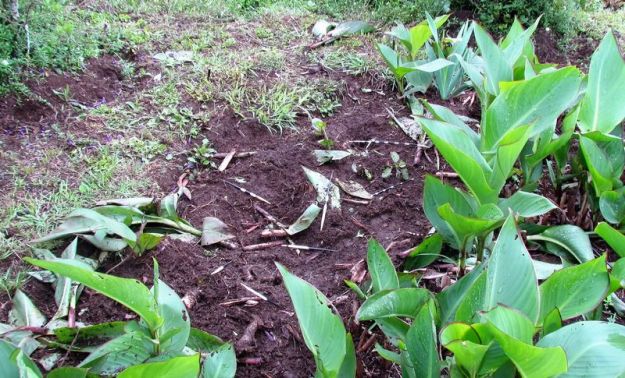 The gymnogene has been terrorising the birds in the garden who have made nests in the trees. Caught a lovely picture of him perched on my bottle brush tree.

A pair of wattle crane arrived at the dam and stayed for a week. 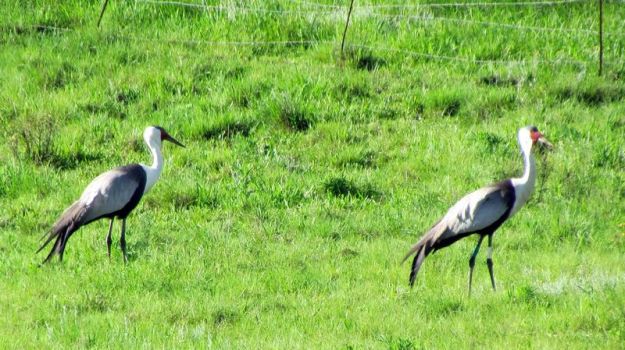 The one has tags on its legs which I had sent to the KZN Crane Foundation for identification.

Response from Tanya Smith, African Crane Conservation Program: “It is so great to get this resighting, this bird is definitely of breeding age and is perhaps looking for wetland area to set up a new territory. The combination of rings (Green/Blue on the left leg and large white on the right leg) is of a bird we caught and colour ringed at the end of August 2011 on a farm just outside Nottingham Road (on the Fort Nottingham Road), from a farm called Shawlands. Therefore this bird is about 5.5 years old.”

The pair of blue crane come and go and do not seem to have made a nest yet. We also have a number of oribi running around – the past 2 days we have seen a pair of males.

There were 5 Grey Crowned Cranes that arrived at the dam one morning.

We also have African Spoonbill,

Little Grebe (where do these waterbirds come from as the dam was empty for months??), Red-billed Teal, Spur-winged Geese and a pair of Egyptian Geese with 5 young who are now about a month old.

We have been inundated with Puff Adders once again – one next to our soak pit eating a frog and the dogs killed an enormous one in our driveway – our rottie proceeded to eat it – we are always concerned that the dogs will pierce the poison sac while eating these snakes – on the same day Pat saw some children from Kazimula school walking down the D18 carrying a dead puffie.

The Steppe Buzzard, and Jackal Buzzard often sit on our dead tree next to the pond waiting for a juicy meal now that our ponds are full.

The Long-crested Eagle is often seen perched on one of the poles along the D18. 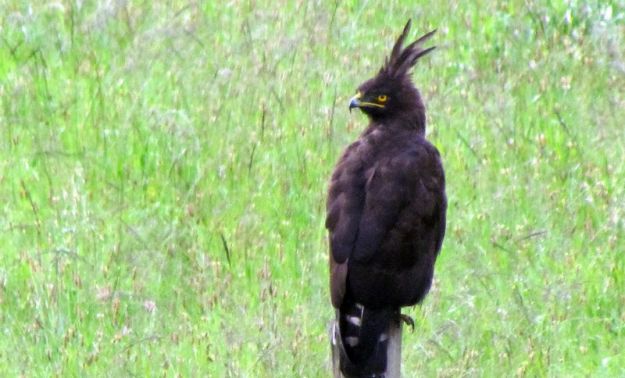 Two White Storks arrived on the farm a week ago. We have a number of Sunbirds flitting around the garden now that the summer flowers are in bloom.  Saw this female Amethyst Sunbird feeding off Wygelia flowers.

The White-throated Swallows that made their nest on our verandah lampshade have hatched out 4 chicks who are now about ten days old. We have to clean up a heap of poop each morning. The other swallows nest outside the bedroom window fell down during a severe wind.

In the past few days a pair of Greater Striped Swallows have arrived and make a huge chirping noise before perching on the hanging basket where they groom themselves. This is about 4pm each day. They are very tame and do not mind my running around and taking photos of them thru the glass doors. We have not had them here before.

The Cape White-eyes have been stealing the coir from my hanging baskets. 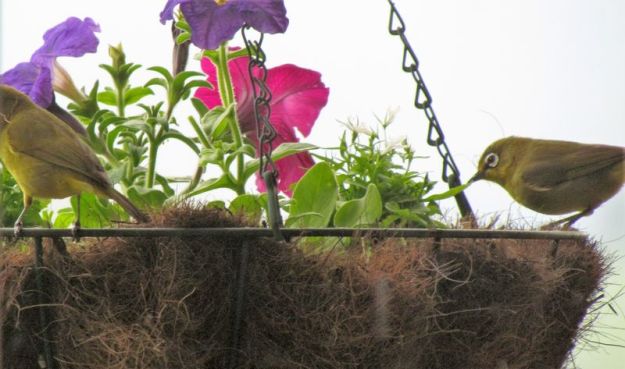 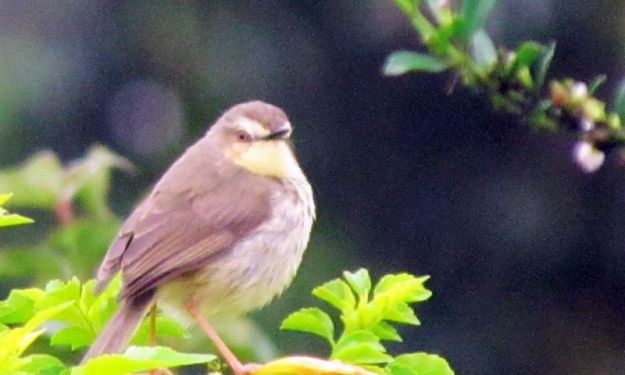 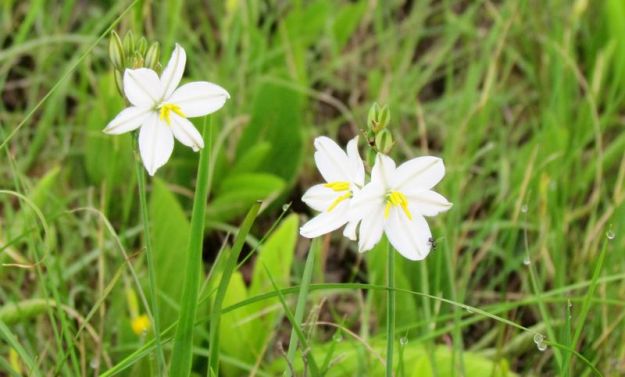 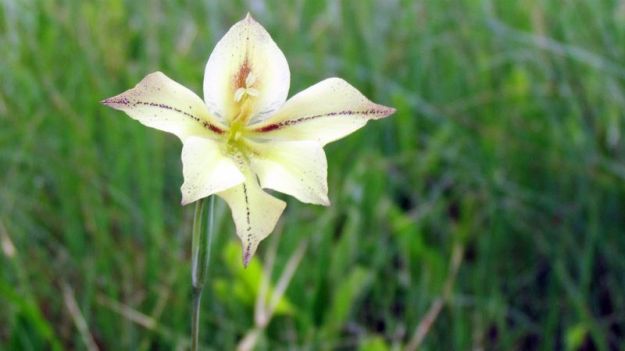 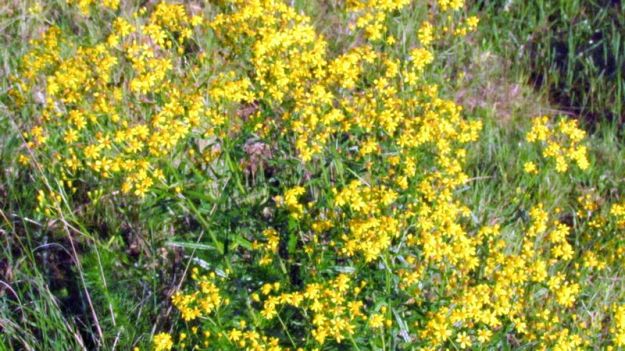 A Rinkhals which has been roaming around the garden for a while. 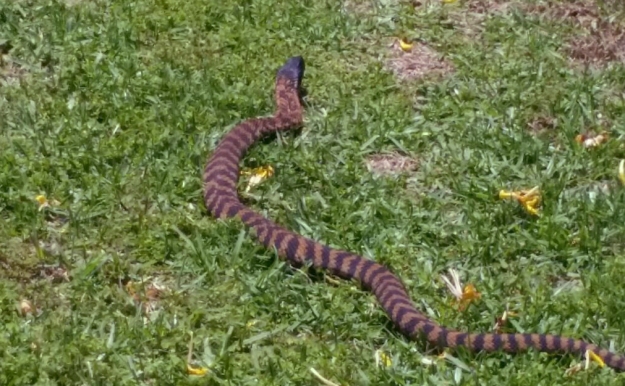 Our small dam at it lowest this year. Only 2 puddles left for the fish. Quite a few died but some fortunately survived. 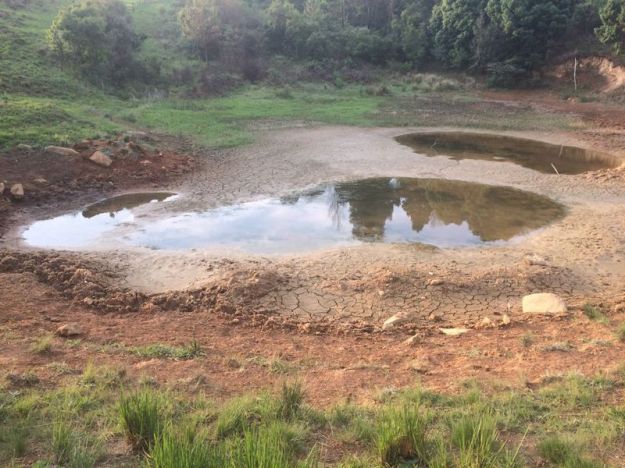 Since the rains we have had recently, things have improved.

The Christmas herald! We have a little patch of Christmas Bells on Kildaragh. They are fast disappearing though. As children we would pick bunches for the Christmas table. Now we look in excitement when we see just one.

Clausena anisata, Perdepis or Horsewood. A neat, small tree for the bird garden. Some Swallowtail butterflies breed on this tree.

A close up of the leaves, which have a very unpleasant smell, when they are crushed. The prolific fruit is visible.

The Pom – Pom tree (Dais cotinifolia). This is an especially large specimen on our property. It was probably planted years ago by June Fannin who planted many trees here but never lived on the property. These trees grow well in the Midlands as is seen along the Main Road in Howick. Always a wonderful show.

Such a treat to have the grassland streams flowing again.

I adore the cool early mornings and frequently wander about at dawn. Seldom have my camera or phone with me, but fortunately did on this day.

Every year I say the same thing, but as this interests me every year, it is worth repeating: Isn’t it fascinating how a patch of grassland that you can be very familiar with suddenly produces an abundance of flowers that you have not noticed much before? Clearly, rainfall and temperature patterns have an enormous influence (never mind grazing and burning) on which plants flower best when. This spring I have particularly noticed Arum lilies thriving, lots of Striga bilabiata, dainty white Kniphofia and more recently lots of Christmas bells – Sandersonia aurantiaca.

The Cape Chestnut (Calodendron capense) hasn’t been as spectacular as usual – the leaves appeared at the same time as the pink flowers. Someone told me that Scilla nervosa has been amazing this year, but I have not noticed that where I walk. Anyway – a few floral treasures to share:

Asclepias gibba – in Lesotho all parts of this plant are eaten. Flowers like sweets, bulbs straight out of the ground and the leaves cooked with other greens.

Pachycarpus natalensis – love the two kinds of ant and the beetle lurking in the flower! 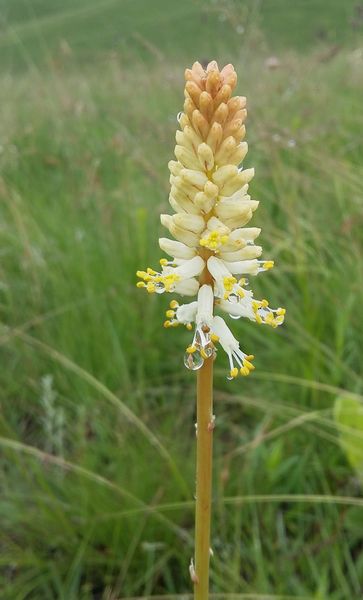 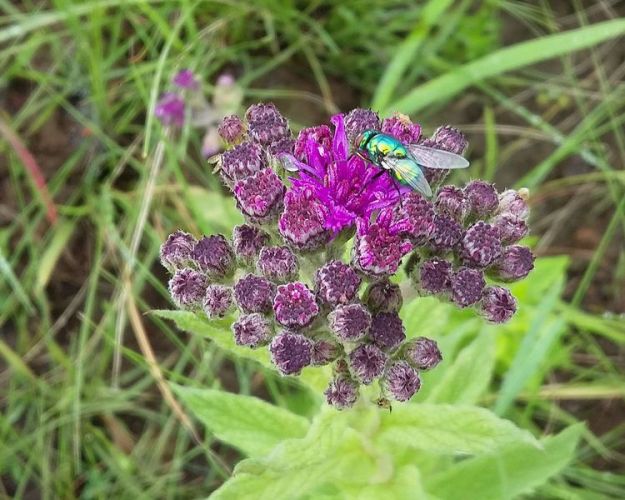 Hypericum lalandii – the tiny indigenous Hypericum, not the invasive shrub. 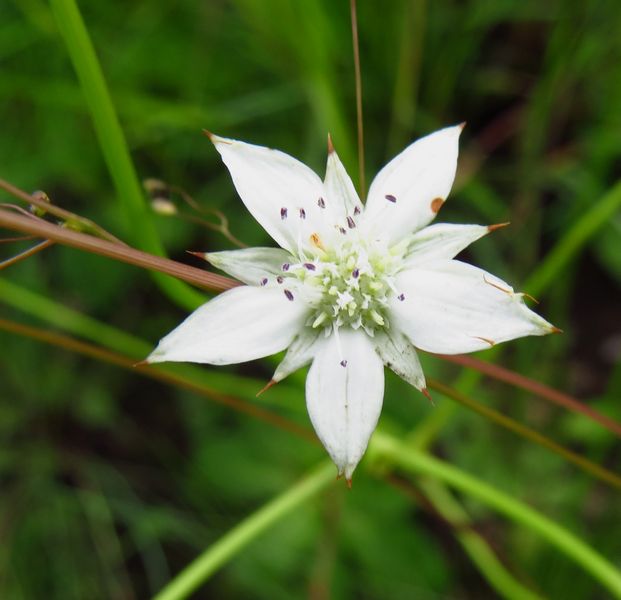 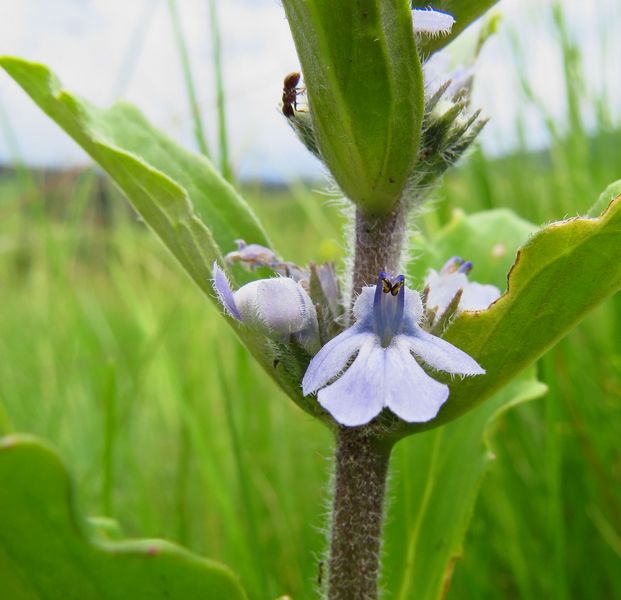 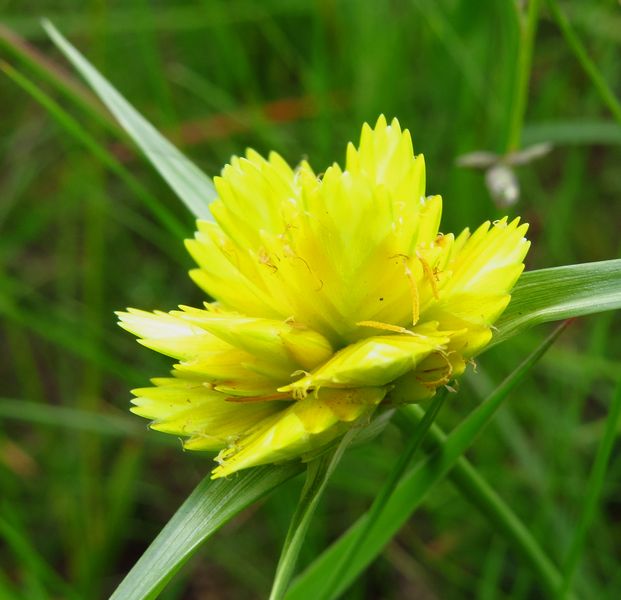 I have never come across this pale Gladiolus before. Not sure what the species is but possibly serica as the stems are really hairy.

Continuing on from last month’s dead things, here is a tiny baby Skink which I found next to the dog’s water bowl 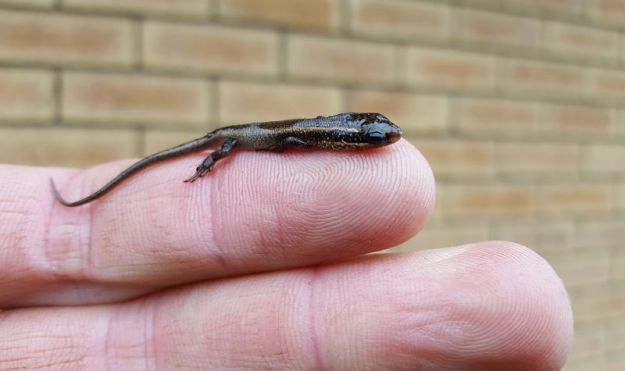 I first thought that this might be the larder of a Fiscal Shrike, but I’m sure something larger like a raptor must have eaten something and left the gizzards on this pole

A juvenile Fiscal Shrike which was stuck in the water tank 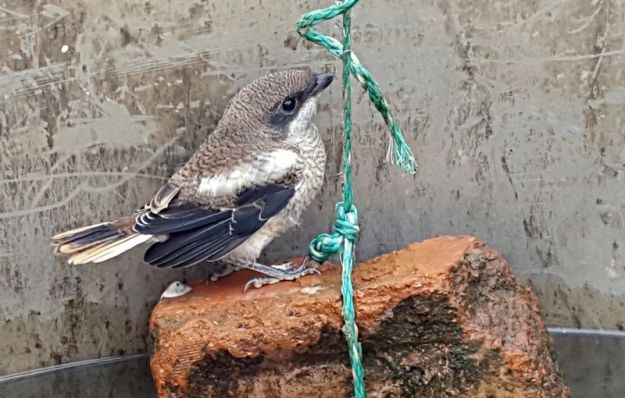 A pretty tame Black-backed Jackal that had been lying in the long grass in one of our sheep day camps, sometimes terrible creatures for us farmers but still beautiful to look at. This one was only about 20m away, taken with my cellphone. I managed to herd it around into the purple flowers for a more visually appealing shot!

Some cracks in the mud of Mavela Dam, hopefully it’ll be full again by the end of summer! Still waiting for a big rain. 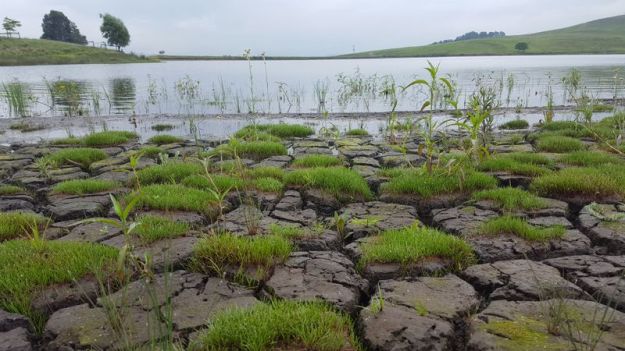 “Working for Water” did a very good job cutting and helping to clear some invasive alien wattle trees on our farm. Hopefully I’ll be able to take a photograph of this corner one day and it will be bugweed and wattle free! 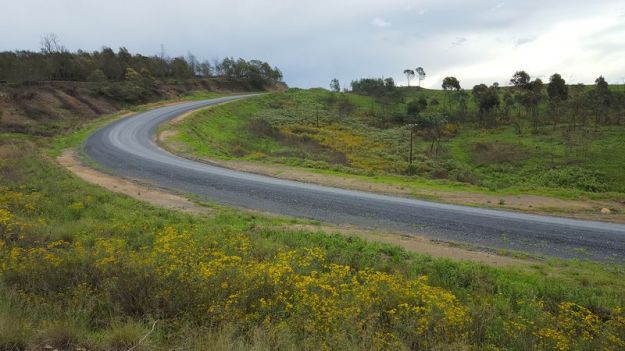 Couple of beetles fighting over a mate 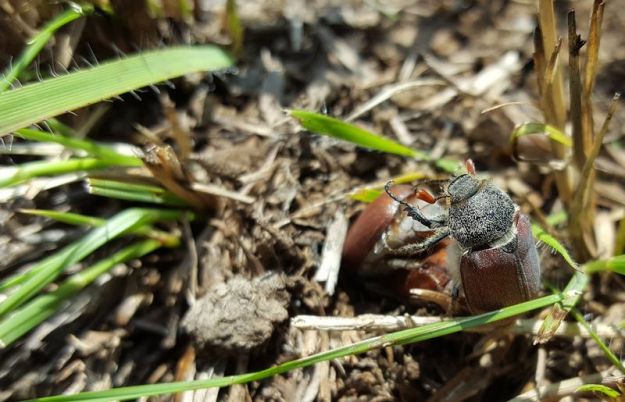 A large fern next to a small pond in the veld

The Rinkhals have been doing the rounds on Copperleigh recently. 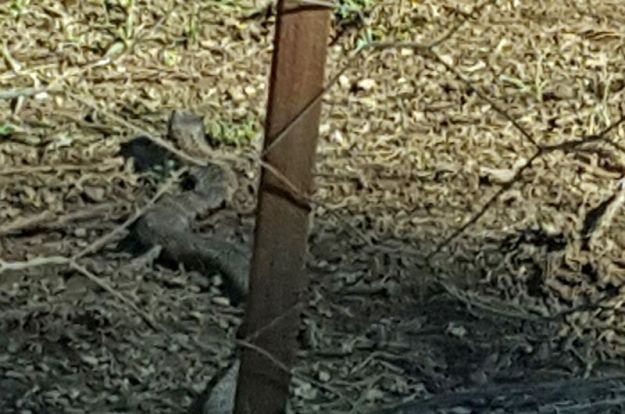 I’m not sure if this is a fly or a bee as I’ve never seen one before, but the colour was very striking on the brown fur of this cow 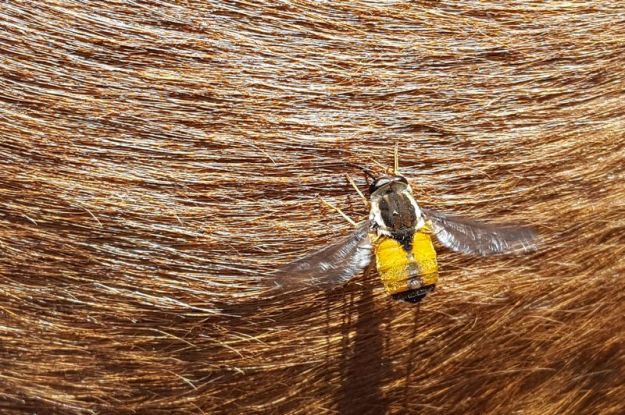 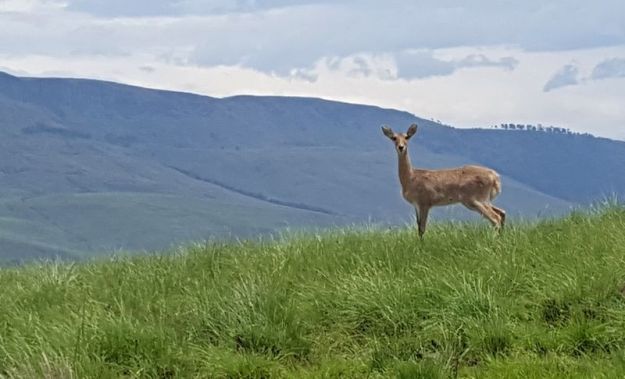 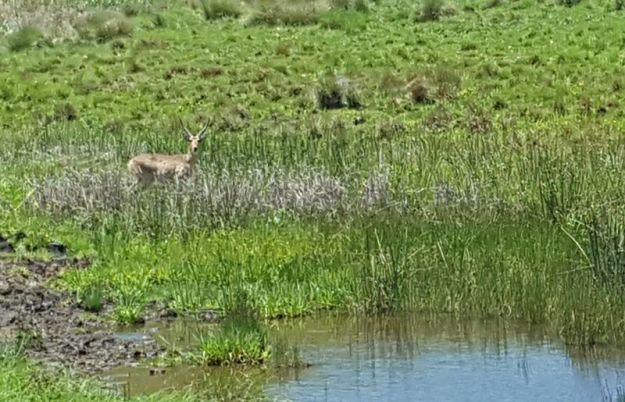 A spider in its dewey web on the ground

I took the dogs for a walk through the veld one Sunday, and took the following images, this is a panoramic view of Inhlosane in the distance

Very happy to have running streams 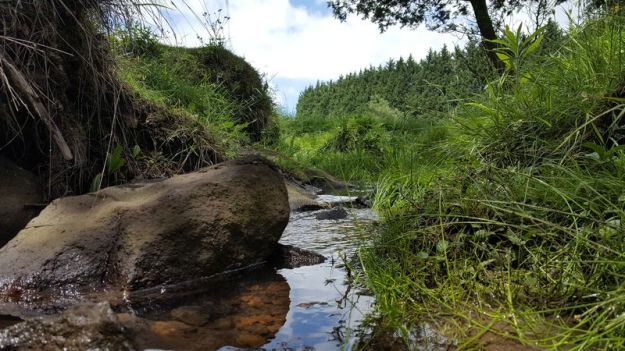 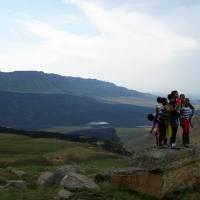 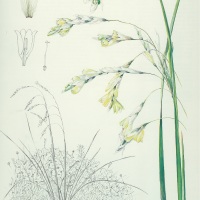