This is a “First” for us up at this end of The Dargle. Great excitement yesterday as I made my 15km trek to get the Sunday papers I saw a bundle at the side of the D666. I reversed back to find 2 baby Honey Badgers crawling over each other. They can’t have been more than 10 days old as it appeared that they still had their eyes closed and were uncertain where to go. I watched then for about 5 minutes before they eventually found their way back to their lair. I guess I must have frightened off the mum as I didn’t see her but I am sure they got home safe. They were between 20 & 25cm long and perfectly formed with their stark black & white coats.

The rest is mundane by comparison. Piet-my-Vrou back in the area for a week or so as well as Black Cuckoo. Yellowbilled duck with 2 chicks on Highveld dam but they seem to have found a new home as we haven’t seen them for a couple of weeks. A thickbilled Weaver seen yesterday in our garden fossicking for food under a tree.

Two Egyptian Geese and two crows were seen having a very noisy argument in one of our trees last week. Our resident pair of African Hoopoes have decided to build a nest under the eaves of our house for the first time and are busy feeding their young. Also seen: Redbilled Woodhoopoe, Long-crested Eagle, Pintailed Whydah, Kite, Wagtails, sunbirds, Grey Herons. A Buffspotted Flufftail has been seen and is calling again each evening near our house. Heard: Burchell’s Coucal, Redchested Cuckoo (Piet-my-vrou). Sipho (Mthalane) says he has also seen a female buffspotted flufftail with a couple of chicks running through the garden to their nest in our orchard. There seem to be plenty of flufftails around so we’re in for some sleepless nights!

Insects: Butterflies, bees and beautiful dragonflies.  An unusual fly with transparent abdomen and bristles on it’s back (Tachinidae Dejeania). 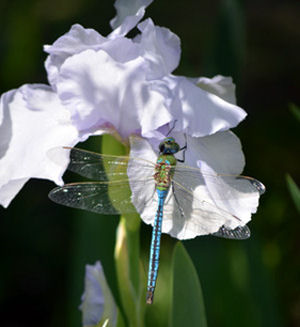 We were having a braai one evening a week ago when a large grey mongoose walked right past us. It was, including tail, over a metre long, a most unusual sighting for us! We had a fully grown reedbuck doe in the garden, right outside the lounge windows. It, like most of the animals around here, took very little notice of us and ambled slowly through the garden and down the road. We have also sighted three secretary birds on the hillside, the last sighting was three years ago.

This is more of a question than a sighting. Six weeks ago a Peahen flew in and decided to stay. She is obviously very tame and quite likes company. Despite my enquiries, I cannot discover where she comes from. Is anyone missing a Peahen?

Have had two birds fly into the kitchen within an hour of each other this morning and now, as I was sitting at my desk an Oribi doe ran up from the forest, jumped intothe swimming pool, swam across got out the step s and raced up the hill. Wonder why it was on this side of the forest, very unusual. Was it being chased?  Fresh Jackal droppings in the arena behind the barn too – a crazy wildlife day.  Wagtails have made a nest in the hay bales in the shed, meaning they cannot be sold for a while!  Sunbirds have nested on a light fitting on the verandah of The Cairn, completely unperturbed by the weddings taking place beneath them.

Harry Tunmer spent a morning with us.  Many of the “old timers”, in the Dargle may remember him.  His speciality is macro photography, concentrating on Insects etc.  We tried getting a good shot of an Earwig (fam. Dermaptera).  They are very common, nocturnal and ours are normally found under rotting bark and in old wood piles.  Busy cutting wattle logs for export and have had a very interested Olive Woodpecker hanging around for insects/grubs under the loose bark.

Been fairly busy around here and the usual flock of guinea fowl are seen daily, two grey duikers and a bushbuck. No sign of the reedbuck for the last two weeks. Hoopoe, fiscal shrikes, lots of swallows and a black sunbird and mate have been flying about and when the flying ants hatched the doves came out of the trees and bobbled about on the lawn happily. Malcolm discovered a lovely big puff adder sunning himself on the woodpile so he was caught and Malcolm popped him in his rucksack and took him off for a motorbike ride to the hills and released him. The kite has been swooping around a lot and a crested eagle spotted in the field- my baby chickens have done a disappearing act hmmmm…. Also had a pair of cranes fly over which was a treat!

Sightings for October where not many due to the permanent mist and drizzle. Here on Wakecroft we found one baby Duck on our pond without parents. Does anybody know what this will be when it is fully grown?

Lots of frogs and other aquatics. Even the Flycatcher looked back to find the sun. 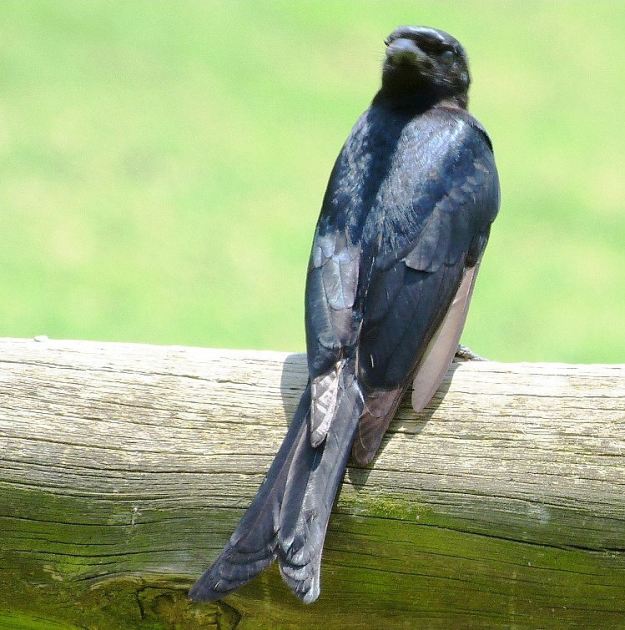 Well, October for us has seen massive amounts of water arrive from the hills around us, swelling each watercourse to full capacity and filling our dams to levels not seen since 2008. The resulting mud has been ‘interesting’ to say the least and our driveway is as usual – hair-raising, as we have only two options on one section – the drop or the drink – falling off the dam wall or falling into the dam. When one is sliding sideways along the wall these become very real and no 4×4 option makes it any less real.

The flufftails started up their mournful courting calls in the forests in mid-October and the first Piet-my-vrou started calling on the 1st of October. The Yellow-billed Kites are nesting in a huge Kiepersol and have their usual aerial battles with the buzzards as soon as the ‘invisible line’ is crossed by the buzzards. The full dams have attracted the crowned cranes and large parties of spurwing geese, who offend our resident gyppo geese mightily. The fish eagles are heard and seen regularly. Two lovely water mongoose/geese? were spotted on the lawns near the dam below the house one wet afternoon, they had a really good look at us before sloping off down into the dam and streams.

We have had some lovely serval sightings on the farm and on the P130. In this rather chilly spell we had a really large Natal Green snake trying to sun itself in the Halleria lucida outside our bedroom and have had two huge puffadders up in the field behind the house where we were felling wattle.

The dam on Old Kilgobbin is usually only full at the end of December, but it is already overflowing now!

One oribi – hiding in Bracken. 2 bushbuck with group of Samango monkeys on edge of forest eating green shoots – seen often.  A couple of common duiker.