Dargle is very, very green already and we are delighted with the rainfall we have received.  Cuckoos are all back – wonderful to hear them calling – the sounds of summer.

Nikki Brighton – Old Kilgobbin Farm Mammals: Bush buck male and female, plenty of reedbuck (8 on one occasion), including this one who simply lay in the grass as I drove by and one dead male, 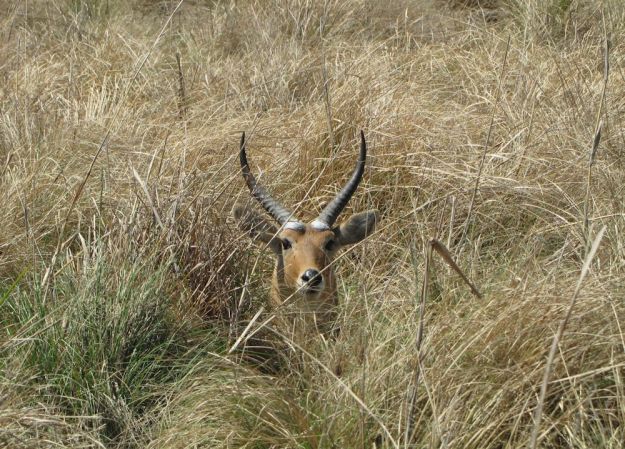 3 oribi, plenty of Samamgo monkeys – one hangs out in my garden eating lemons or raiding the birdfeeder. He even pops into my kitchen occasionally to help himself to an apple or pear from the fruit bowl! 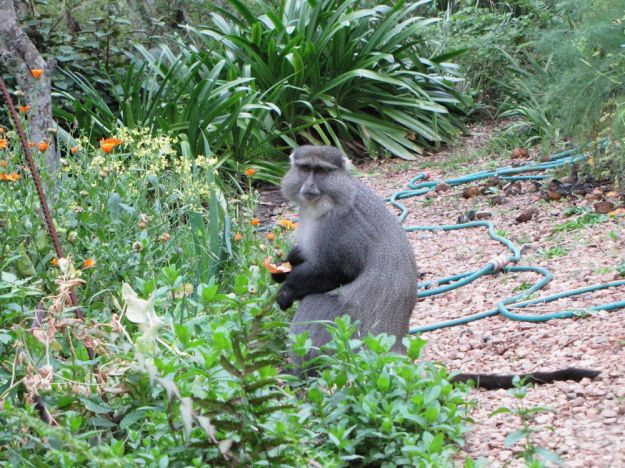 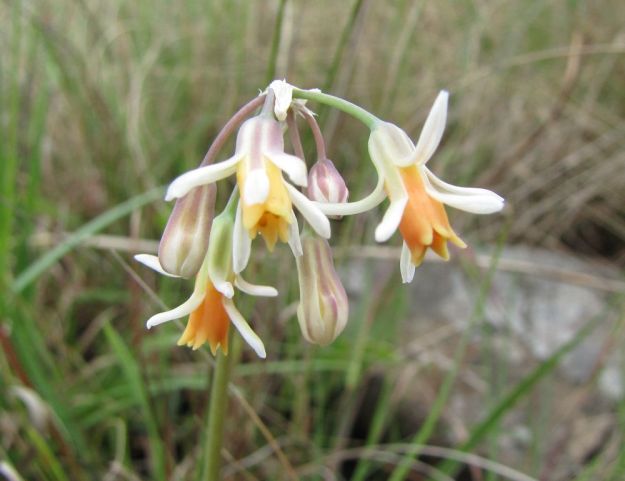 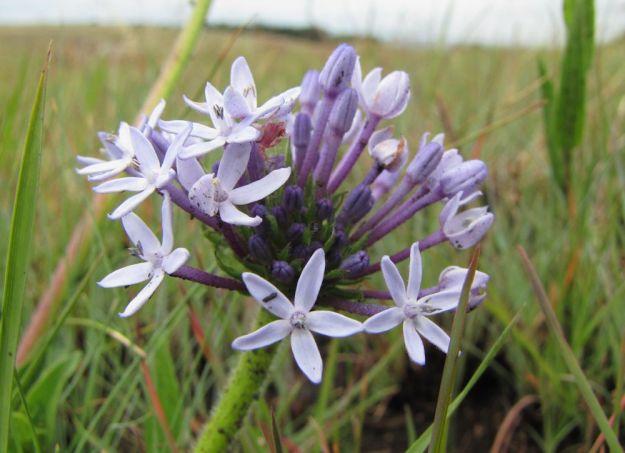 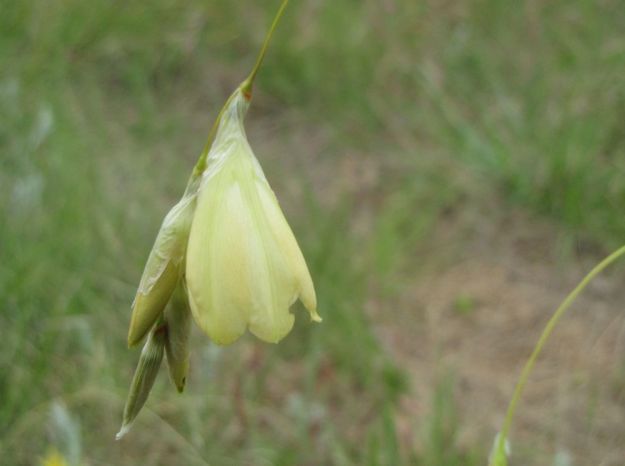 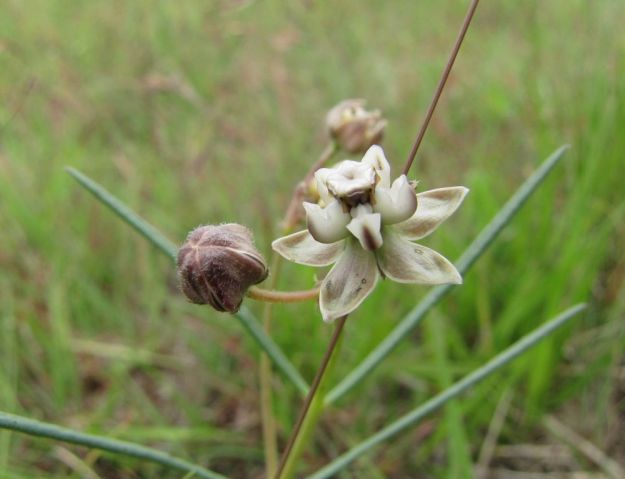 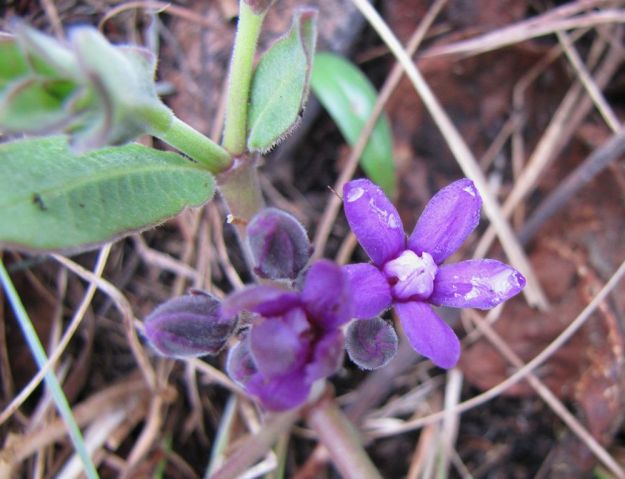 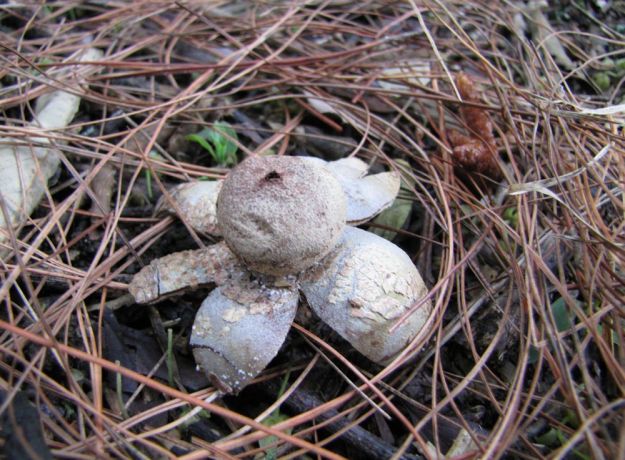 Vaughan Koopman – River Front Farm After being on River Front Farm for nearly 8 years I spotted a black crake scrambling amongst rocks and vegetation on the islands in the uMngeni river. I was doing some alien plant control follow-up work on the island before the summer high waters arrive when I spotted it.  What makes it a surprise is that it took so long to see one and also that they are typically found in more wetland type habitat. I like to think it’s because the islands are in a better shape since most of the wattle and mulberry have been cleared. 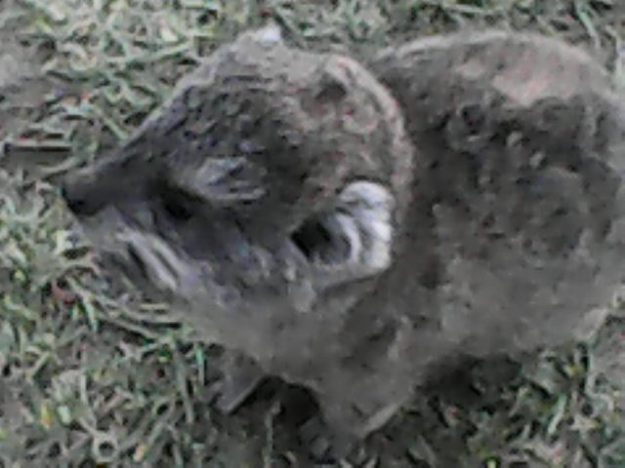 From Mike and Anne Weeden – River Run Had a first for us last week with a baboon in the veggie garden. Another unusual sighting was of a fully grown male reedbuck being chased along the river bank by two black backed jackal at seven in the morning. The buck eventually escaped by jumping into and crossing the river onto our side. The swallows that returned to last years nest have now hatched three youngsters.

Kathy and Wayne Lourens – Aloe Ridge Farm Back on Aloe Ridge Farm and Hopedale Mistbelt Sanctuary, after both our vehicles failing us expensively, we lost a stunning new-born Nguni-X heifer calf overnight to jackals, the day I was discharged from hospital after the nose op, which meant I never even saw it. Kathy thinks it was one of the best heifers she’s seen, so jackals dropped off our “favoured” list for a day or two. There’s been a beautiful caracal sighted over the past few months on different parts of Hopedale, mainly by staff, but Kathy had a glimpse of it shortly before our Botswana trip, on the top of the hill above our indigenous forest. In the first week of October, two Blue Cranes circles over the Aloe Ridge paddocks & sand arena, calling distinctively even before they came into view. I sent a staff member running for Kathy, who was able to get a good sighting before they flew off up the Umgeni Valley. This month also saw the return of the swallows, and our resident pair of Lesser Striped Swallows began building on the lintel over the alcove on the Aloe Ridge front verandah. 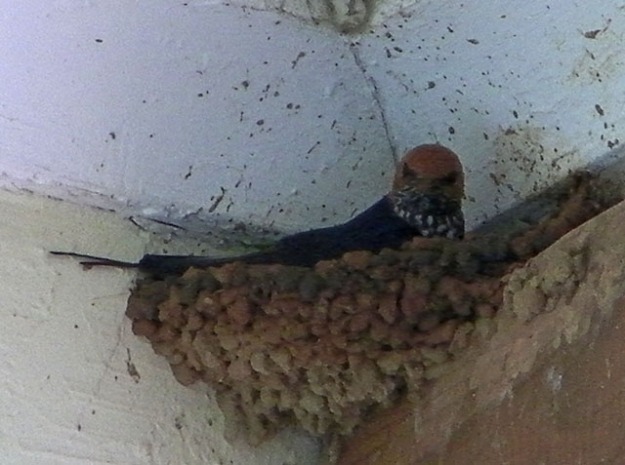 It’s been interesting watching them build their mud nest from the inside, looking as though they’re dimensioning it to their body length & width. Last week, Mike & Anne Weeden found a lone male baboon in their vegetable garden & asked it to kindly leave. The following morning (Friday), we heard it shouting in our indigenous forest, but an urgent trip to PMB was needed, and by the time we returned in the late afternoon, we could no longer hear it. 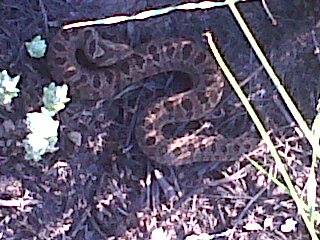 David, our Manager,   almost stepped on a small but very vocal puff adder near the Hopedale Mistbelt  Sanctuary main dam on his way home from work earlier in the month. He stopped   to take a few photos of it, when it calmed down & realised he wasn’t  about to disrupt its afternoon siesta. Pat McKrill tells us: The snake in the photo is actually a rhombic night adder, Causus rhombeatus which is, as reported, equally as vocal as the puff adder, Bitis arietans – often leading to misidentification – but it’s nowhere near as venomous.  The arrow on the head and the ‘rhomboid’ (hence the name) markings down the body are diagnostic. It is actually a very even tempered snake and calms down quickly – rather like a spoilt child who shuts up if you just ignore it. After our August block burn of Hopedale Mistbelt Sanctuary (to clear 5 years worth of vegetative fire-hazard fuel load), we saw little of the 12 to 15 strong population of Reed Buck. However, this morning (Monday) there were 3 nearly together just north of the Hopedale Mistbelt Sanctuary main dam. Kathy came back after riding her quadbike up to Hopedale Mistbelt Sanctuary on Sunday morning, very excited. What we thought were ducks on the main dam, she saw had goose characteristics, and looking them up, saw that they are Pigmy Geese. We managed to get a distant photo of one this morning. In closing, on a semi-wild note, our flock of domestic guinea fowl have been very vociferous throughout the night over the past few months, and were roosting in the tree in front of the house. We started talking to them quite sternly, and eventually after chasing them away from their roost, I suggested they relocate to the trees around the water-storage tank. Blow me if they didn’t go straight there to roost, and have been there ever since!!! Barry and Rose Downard – Oak Tree Cottage  Seen: Bokmakierie, Redbilled Woodhoopoe, Longbilled Crombec, Yellowbilled Kites, Black Kites, flocks of Guineafowl and Redbilled Queleas, Grey Herons, Egyptian Geese, Lesser Doublecollared Sunbirds, Amethyst Sunbirds, Cardinal Woodpecker, Crowned Cranes. Lots of flying ants, including a huge swarm along the Dargle Road near D17 on Monday 28th.  Carpenter bees, butterflies, beetles, ladybirds, millipedes, frogs, skinks. Heard: Fish Eagles, Buffspotted Flufftails, “Piet-my-Vrou” (Red-chested Cuckoo – Cuculus solitarius), Jackals. Ashley Crookes – Copperleigh Farm 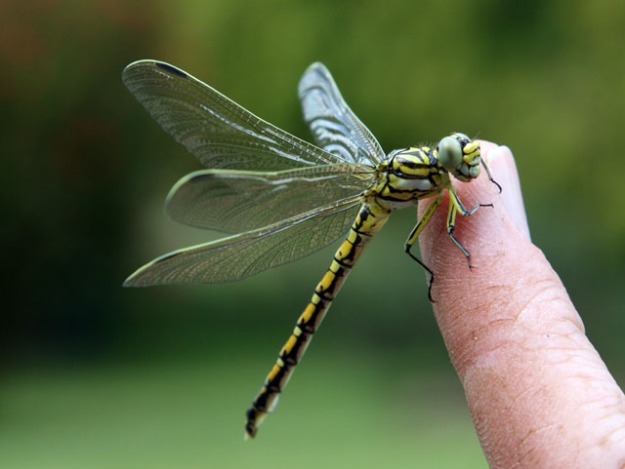 Simon Hayes – Hambledon  I think this is a brown house snake which my dogs found in our flower bed. Sadly it didn’t make it. 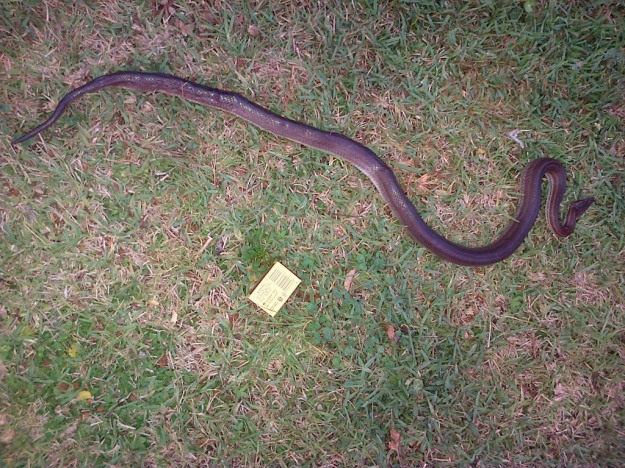 Sandra and Pat Merrick – Albury Farm There have been a number of male reedbuck in our garden this month.  One lay on the grass burn and watched me watering my garden all morning. 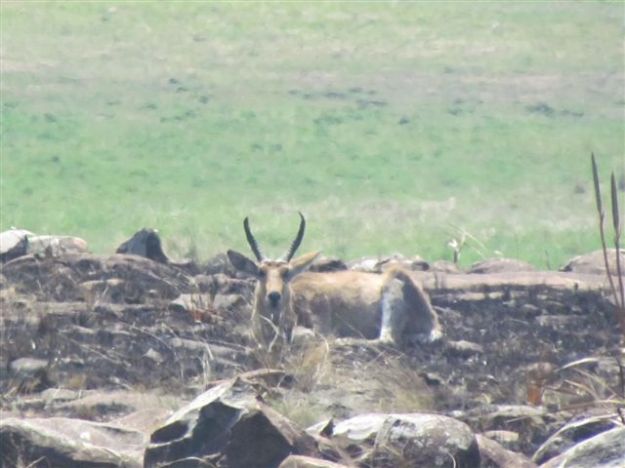 On the 9th October I awoke early as I was flying off to Israel, and on the front lawn was a gymnogene hopping around and on top of the rocks, trying to catch lizzards and rodents.  It was fun watching him flap his wings trying to get whatever out of its hiding place. 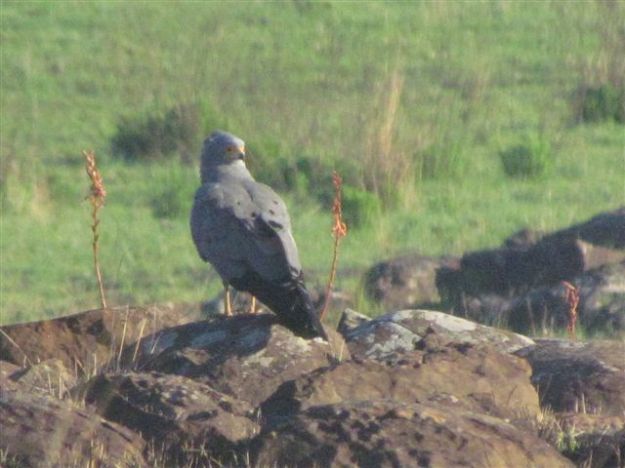 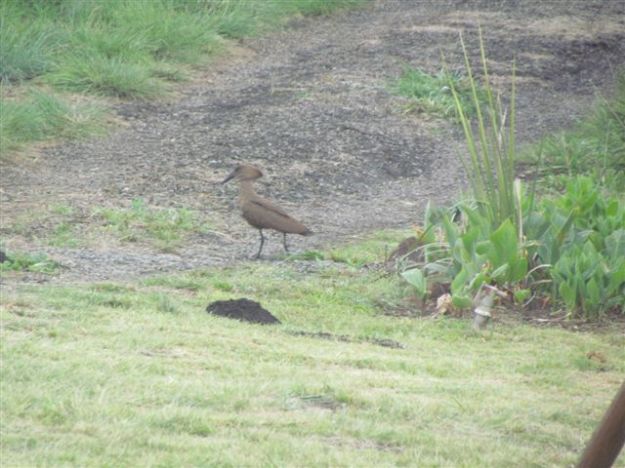 Pat made a note of animals and birds while I was away.  His contribution: Secretary bird walking the hills every few days. Common quail are back. Spurwing geese back now that we have had some rain and water in the dam once again. Heard Piet my vrou on the 10th Oct. Swallows struggling to find mud to build nests, but now, with all the rain, they are building double storeys! (Pats joke). Blue crane and crowned crane on the farm again. A few days ago on my return, we heard flapping one evening on the door of our study next to verandah and found a disorientated male Diederichs cuckoo.  We put him safely in a container for the night and next morning I asked my maid to hold him so I could take a picture before releasing him. 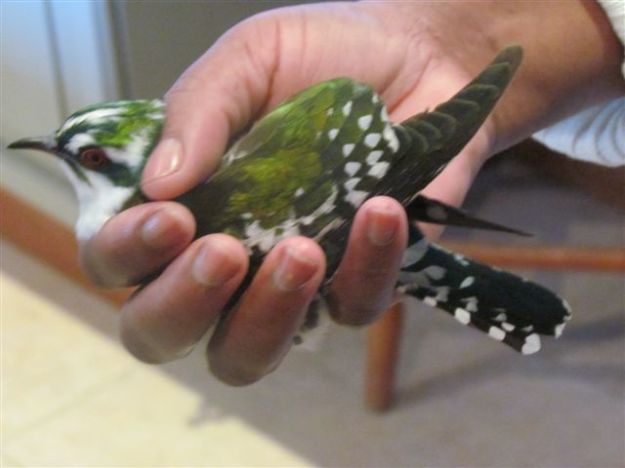 We have had 159ml rain this month up till 27th Oct.  Our prayers have been answered and our dam is rapidly filling. 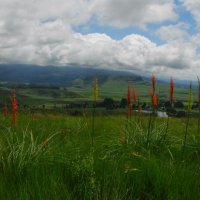 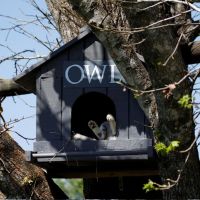 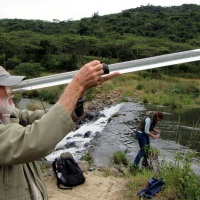 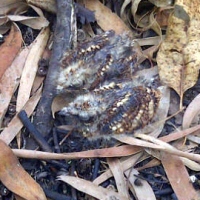 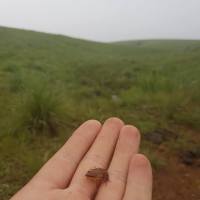